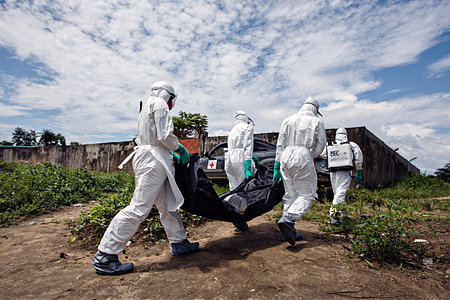 The Ebola situation in West Africa is now creating a humanitarian crisis on a scale far greater than most people realise with millions now at risk not just from Ebola but from the widespread effects that this crisis has had on the countries concerned.

Whilst many thousands have fallen victim to the Ebola outbreak this is only the tip of the iceberg. The fact is that the healthcare and emergency services in these countries are doing a heroic job with many brave healthcare workers giving their lives to try and help treat/contain the outbreak, but the truth is the system is at near collapse. This has, in turn, led to major problems in dealing with other serious health issues and killer diseases such as malaria, tuberculosis and of course HIV/AIDS, all of which dwarf the current mortality rate of Ebola, together with the many other day to day health issues that require medical support that is no longer available. At best people who need such medical assistance may get cursory care but more likely there is no help available or worse they may end up alongside an Ebola patient.

Add to this the effects of all these deaths on families and communities who have been left devastated by their losses, coupled with a breakdown of civic structures, major loss of employment from the many foreign companies that have shut down or reduced operations, and the widespread hunger, and it is easy to see how this humanitarian crisis is unfolding.

Whilst Britain and other countries are now providing much needed aid and assistance much more is needed. The various charities and NGO’s operating in the region are equally doing a good job but the scale of the problem is huge.

We have therefore launched our Ebola Crisis Appeal Fund to help alleviate suffering in the region caused by this crisis and provide much needed support to the local communities. Donations can be in the form of monetary gifts, with 100% of all monies received going to the charitable cause, or donations can be in kind (clothing, blankets, non-perishable food, toys etc.) which will be distributed utilising Westminster’s extensive infrastructure and networks.

Details of how you may donate can be found on the Donate page available in the menu above.

Or by email to ebolaappeal@wg-foundation.org