Westminster Foundation recently made a donation to the Sierra Leone Tacugama Chimpanzee Sanctuary to assist with education support programmes in schools. 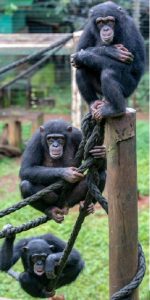 Sierra Leone’s chimpanzee population is rapidly declining and facing a serious risk of extinction, over the past 24 years the chimpanzee population has drastically reduced by more than 80% as a result of poaching (despite this being illegal), loss of habitat and habitat fragmentation due to human activities.

The Tacugama Chimpanzee Sanctuary is working on many fronts to prevent the extinction, they do this by awareness education programmes in schools, producing and circulating posters with the chimpanzee’s new status as Sierra Leone’s national animal and that it is illegal to eat bushmeat

The Tacugama team target is to protect as much as possible the chimpanzee population in Sierra Leone and the rest of the biodiversity. But despite their efforts, baby orphan chimps keep arriving at the Sanctuary, unfortunately changes in attitude to the wildlife will not happen overnight.