As you can see from the photo’s below, the junior library is now  complete. 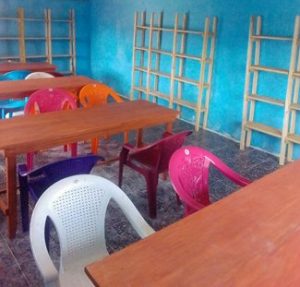 We are going to re-locate the water tank, shown on the right of the picture below, to a more suitable position where it will not cause an obstruction and it will collect water from the existing classroom block and the library room – this work will be completed this week. 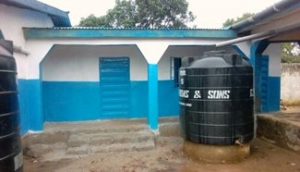 A message of thanks from Liverpool School

We continue to thank you and your supporters, for making GREAT differences in our communities, especially in our Liverpool Schools.

Our community is very proud to have such wonderful facilities that have benefited, and will continue to benefit, generations yet unborn. You have delivered our children from total darkness to a brighter future with promising opportunities.

We will ever be grateful to you ALL.

We still need to finalise the purchase of all the text books for both the junior & secondary school and the equipment for the laboratory.

Westminster Foundation  Trustee Alan Wolstencroft has recently returned from a trip to  Freetown where he was able to check on the progress at the Sanaya Academy, where the Foundation is supporting the building of a classroom block.

Alan was also overseeing the distribution of a large quantity of humanitarian aid items that had recently been shipped to the country courtesy of Westminster Group Plc.

Staff from Westminster Aviation Security Services Ltd have been visiting and monitoring the project throughout the building programme, which started last November.

Alan is now pleased to be able to report that Phase 1 of the project (the building of 2 classrooms) had been completed just prior to his visit , with just a few finishing touches still needed. 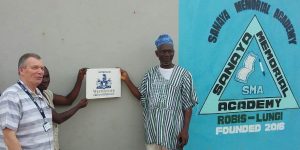 Alan commented that he was delighted with the outward appearance of the new building but was somewhat surprised when turning the corner when he noticed that there were 3 steel doors leading off the veranda.

The school representatives explained that they had been able to raise sufficient funds during the building programme than enabled them to construct an extra classroom. Showing the Foundation that they are doing all they could to improve the facilities at the school. 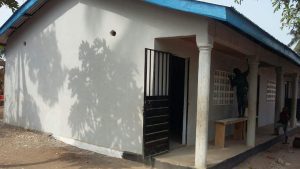 Alan commented that it is always great when working on a project such as this that the school is also contributing  towards the project and not just expect everything to be done for them.

The Foundation likes to support a project with a “Hand Up” and not just provide a total  “Hand Out”,  the Sanaya Academy has from the outset of our involvement has demonstrated its’ commitment to try and help themselves.

The completed 3 classrooms measure 6 metres square and are capable of seating up to 45 students.

Part of the support provided by the Foundation was to supply 20 school desks and 140 chairs which had been donated by three local organisations in the Banbury area. These had been shipped on the container and were delivered to the school in time for the official opening of the classroom block which took place during Alan’s visit. 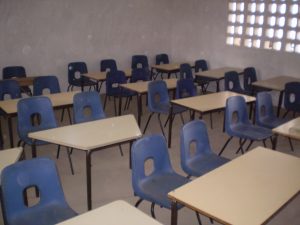 There were enough desks to fully equip one classroom and enough chairs for all three classrooms. This provided a cost saving to the project as the school only needed to make enough wooden desks for two of the classrooms and no wooden benches were needed. 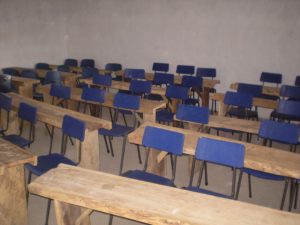 It is hoped to start Phase 2, the second three classroom block, in the next few days, there is a quantity of sand and granite stones left over from Phase 1 of the project to kick start the process.  If all goes to plan the foundations will be laid prior to the onset of the rainy season which is due to start at the end of May. 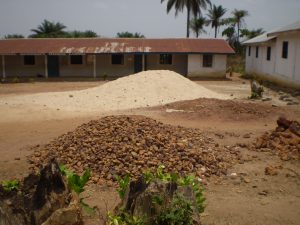 If you are interested in supporting this project we have a “shopping list” with prices of various items for both the building and the equipment / furniture.

To make a donation use this link

It has just been announced that Trustee Alan Wolstencroft is to  receive a Rotary  “Champions of Change award”  (one of only 12 awarded annually), with other Rotarian’s from across the country, at a ceremony hosted by the Lord Mayor of Cardiff in Cardiff City Hall in May 2018.

Denis Spiller, President of Rotary International in Great Britain & Ireland, commented:-
“The selfless and truly life-changing impact of our champions really demonstrate that we can all make a difference. Alan’s work in Freetown has given the communities a new lease of life. He is a very worthy recipient of a Rotary Champions of Change award.”